[6] A child said What is the grass? fetching it to me with full hands (from Song of Myself)

A child said What is the grass? fetching it to me with full hands,
How could I answer the child? I do not know what it is any more than he.
I guess it must be the flag of my disposition, out of hopeful green stuff woven.
Or I guess it is the handkerchief of the Lord,
A scented gift and remembrancer designedly dropped,
Bearing the owner's name someway in the corners, that we may see and remark, and say Whose?
Or I guess the grass is itself a child, the produced babe of the vegetation.

Or I guess it is a uniform hieroglyphic,
And it means, Sprouting alike in broad zones and narrow zones,
Growing among black folks as among white,
Canuck, Tuckahoe, Congressman, Cuff, I give them the same, I receive them the same.

And now it seems to me the beautiful uncut hair of graves.
Tenderly will I use you curling grass,
It may be you transpire from the breasts of young men,
It may be if I had known them I would have loved them,
It may be you are from old people, or from offspring taken soon out of their mothers' laps,
And here you are the mothers' laps.
This grass is very dark to be from the white heads of old mothers,
Darker than the colorless beards of old men,
Dark to come from under the faint red roof of mouths.
O I perceive after all so many uttering tongues,
And I perceive they do not come from the roofs of mouths for nothing.
I wish I could translate the hints about the dead young men and women,
And the hints about old men and mothers, and the offspring taken soon out of their laps.
What do you think has become of the young and old men?
And what do you think has become of the women and children?
They are alive and well somewhere,
The smallest sprout shows there is really no death,
And if ever there was it led forward life, and does not wait at the end to arrest it,
And ceased the moment life appeared.
All goes onward and outward, nothing collapses,
And to die is different from what anyone supposed, and luckier. 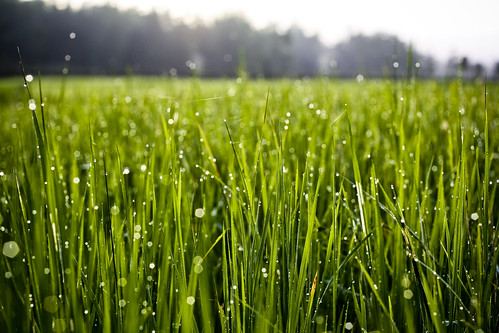 View All Poems by Walt Whitman

Whitman's meditation on grass. I can tell, a few of you are rolling your eyes. After all, it's just... well, grass. The same green plant surrounding every suburban home, and growing tall in every field and hillside all over the world. We tread on it every day. We know what grass is: it's forgettable.

Not so, says Whitman. We think we know what grass is and remain ignorant. It's easy through familiarity to become blind. We see a lawn, mentally label it as "grass," and never really look or bother to know this plant with which we share so much of the world.

A child said What is the grass? fetching it to me with full hands,
How could I answer the child? I do not know what it is any more than he.

This seems to me the most honest response. Most people presume they know exactly what grass is and can therefore dismiss it from their awareness. But the poet properly sees in it a vast, living mystery to be considered.

With Whitman we ask, what is grass really?

It is green hope. It is a handkerchief flirtatiously dropped by God to draw our thoughts to the lovely Face. It is the "babe of vegetation," the embodiment of new life and new growth in the plant world.

It is a hieroglyphic, a message layered with hidden meaning. It is a universal teaching encoded in life itself: Like the world's green grasses, we must give generously of ourselves, equally to high and low, without regard to race or nation. Like the grass, it is our nature to grow and to be present, to share our life in every land and landscape.

And now it seems to me the beautiful uncut hair of graves...
It may be you transpire from the breasts of young men...

Why this gloomy turn? He doesn't just imagine the graves of the elderly, people who had lived a full measure of life, but he sees too the graves of young men even infants "taken soon out of their mothers' laps." It is important to remember that Whitman is writing in the aftermath of the American Civil War. In fact, during the war, he worked in the New York hospitals. He well knew the unromantic realities of war, how the young are sacrificed, the loss of an entire generation.

But you notice here, and elsewhere in his poetry, he makes room even for suffering and violence and death in his philosophy. While he clearly has a compassionate heart, he doesn't simply label some experiences as unjust which he will then heroically oppose. Instead, it is as if he watches it all -- the beauty and the suffering, everything -- unfolding... within himself. It is all him; it is all in the scope of his being. Doing this, he accomplishes a truly courageous feat: integration.

Through that integration, we gain a new vision. We see not life with its end in death, but a living, organic flow of life becoming life becoming life, a perpetual vision of self-renewal. And the grass is the embodiment of this process.

While the dead lie beneath the ground, this green life grows from their now quiet bodies, nourished by their hopes. From the dead comes such pure, delicate new life.

Though there is definitely much to be mourned in Whitman's catalog of the dead, personally I find it profoundly healing. The grass, the growth of new life, seems to draw even the most "wrongful" death into a realm of wholeness and continuity. This vision, which has made room for death, yet understood it as part of a greater unfolding of life, welcomes us back into the family of life. Is it weird to say that?

The smallest sprout shows there is really no death.

Don't you love that line?

All goes onward and outward, nothing collapses,
And to die is different from what anyone supposed, and luckier.

That last line, every time I read it I am brought to a halt, ready to laugh out loud. What is he saying? "To die is different from what anyone supposed, and luckier."

This whole poem has been his observation of how life renews itself, even through death. But here Whitman seems to be implying something more personal and open-ended, as if his meditation has led him to the awareness that death is a sort of initiation into a broader participation in existence. He doesn't seem to espouse a simplistic notion of life after death, but he definitely implies a continuation of awareness beyond death. What do you think he intended? Or did he intend a specific meaning at all? Maybe it's more of a teasing, Zen-like riddle that doesn't offer an answer so much as a pathway of questioning...