You leave your greatness behind you

Jani has had enough of samsara,
but how will I repay my debt?

You leave your greatness behind you
to grind and pound with me.

O Lord you become a woman
washing me and my soiled clothes,

proudly you carry the water
and gather dung with your own two hands.

O Lord, I want
a place at your feet,
says Jani, Namdev's dasi. 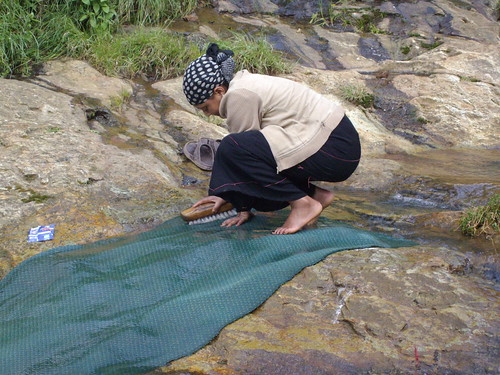 View All Poems by Janabai

Janabai starts off this poem by proclaiming that she "has had enough of samsara," the world of suffering and illusion. But how can she purify herself of karma? -- "how will I repay my debt?" -- She begins with a daunting image of God and karma, God as a sort of king who mercilessly collects karmic debts.

But then the vision shifts to something more intimate. God leaves his "greatness" behind and, like Janabai herself, takes on the humble role of a servant "to grind and pound" and wash. These are traditionally a woman's duties in this culture, so God has "become a woman," a loving mother rather than a stern father.

But what is being washed here is Janabai herself and the "soiled clothes" of her consciousness. She implies that God's grinding and pounding is being done with her, but also upon her -- the purifying work of karma finally being released. In the divine process of spiritual purification, God takes on the humble role of washerwoman, content to "carry the water" of divine energy that purifies, and not above gathering the dung of the material world which is burned for purifying fires.

This is not a vision of God in might and majesty, not a God kept hidden in temples and obscure rituals, and not a cruel debt-collector. Janabai's God is, like herself, a servant-woman, a God who works side-by-side with her in the daily chores, a God who serves even the lowest servant. Janabai identifies herself as Namdev's dasi or servant, and she is made holy by worshipping as a servant of God. By recognizing the Divine as being similar to herself, she also recognizes that she, even in her humble state, is similar to the Divine.