Past, present, future: unattainable,
Yet clear as the moteless sky.
Late at night the stool's cold as iron,
But the moonlit window smells of plum. 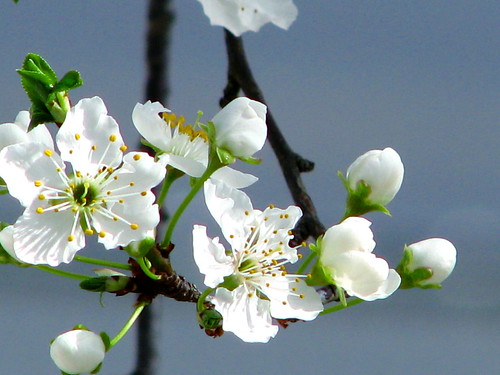 This poem by Hakuin is saying a great deal about the sacred state in its few lines.

Hakuin states that past, present, and future are "unattainable." That is, they cannot be grasped. They are always in motion. People instinctively want to reside in a fixed place within time, but Hakuin is reminding us that that is an impossibility; one can only acknowledge the ceaseless flow of experience without clinging.

This realization leads to a still mind. Sky is often a metaphor for the awareness, that which overarches and reveals all things to perception. When the awareness is "moteless," no thoughts obstuct the mind, making it clear.

The moon is often a codeword in Buddhist poetry for the individual mind attaining enlightened awareness. And plum, cherry, and other spring blossoms can represent the delicate, natural flowering or awakening of Buddha mind in early spring after the long winter of spiritual practice. So when Hakuin speaks of how "the moonlit window smells of plum," it can be understood as Hakuin poetically telling us how this glimpse of pure insight resulting from a deeply still mind holds the delightful promise of Nirvana.