All beings are primarily Buddhas.
It is like water and ice:
There is no ice apart from water;
There are no Buddhas apart from beings.

Not knowing how close the truth is to them,
Beings seek for it afar -- what a pity!
They are like those who, being in the midst of water,
Cry out for water, feeling thirst.

They are like the son of the rich man,
Who, wandering away from his father,
Goes astray amongst the poor.
It is all due to their ignorance
That beings transmigrate in the darkness
Of the Six Paths of existence.

When they wander from darkness to darkness,
How can they ever be free from birth-and-death?

As for the Dhyana practice as taught in the Mahayana,
No amount of praise can exhaust its merits.
The Six Paramitas--beginning with the Giving, Observing the Precepts,
And other good deeds, variously enumerated,
Such as Nembutsu, Repentance, Moral Training, and so on --
All are finally reducible to the practice of Dhyana.

The merit of Dhyana practice, even during a single sitting,
Erases the countless sins accumulated in the past.
Where then are the Evil Paths to misguide us?
The Pure Land cannot be far away.

Those who, for once, listening to the Dharma
In all humility,
Praise it and faithfully follow it,
Will be endowed with innumerable merits.

But how much more so when you turn your eyes within yourselves
And have a glimpse into your self-nature!
You find that the self-nature is no-nature -
The truth permitting no idle sophistry.
For you, then, open the gate leading to the oneness of cause and effect;
Before you, then, lies a straight road of non-duality and non-trinity.

When you understand that form is the form of the formless,
Your coming-and-going takes place nowhere else but where you are.
When you understand that thought is the thought of the thought-less.
Your singing-and-dancing is no other than the voice of the Dharma.
How boundless is the sky of Samadhi!
How refreshingly bright is the moon of the Fourfold Wisdom!
Being so is there anything you lack?
As the Absolute presents itself before you
The place where you stand is the Land of the Lotus,
And your person -- the body of the Buddha. 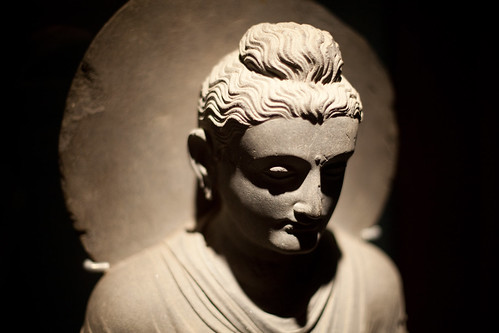 After Wednesday's epic rambling Zen-Beat "scripture"-poem by Kerouac, I thought it might fit to follow up today with a more traditional, highly revered poem by the great Zen master Hakuin Zenji.

You will see that several of the ideas Kerouac was exploring are expressed here, as well, though in a much more contained and elegant manner. The essence of the two poems might be summed up as everything is already That, or, as Hakuin starts us off--

All beings are primarily Buddhas.

It is simply ignorance about one's own nature that keeps us blind to our inherent enlightenment.

Not knowing how close the truth is to them,
Beings seek for it afar -- what a pity!

They are like those who, being in the midst of water,
Cry out for water, feeling thirst.

We can see this insight as absurd, even offensive to all of our struggles -- or it can be the key that brings us immediately into the awareness of our own enlightened nature, right now.

Dhyana - Meditation. Read this not simply as the act of sitting still, but as the inner state of deeply collected awareness.

Dharma - Can be translated as the Way, the Path, the Law, Righteousness. We might think of it as the directional flow of universal consciousness and how we, through our focus and actions, enter into that flow.

Samadhi - The blissful union of the individual awareness with the Eternal, often considered the mark of enlightenment.

The Six Paramitas - These are six qualities or "perfections" that naturally appear along the spiritual path: generosity, morality, patience, joyful action, concentration, and wisdom.

Nembutsu - The practice of chanting the names of the Buddha.


As the Absolute presents itself before you
The place where you stand is the Land of the Lotus,
And your person -- the body of the Buddha.