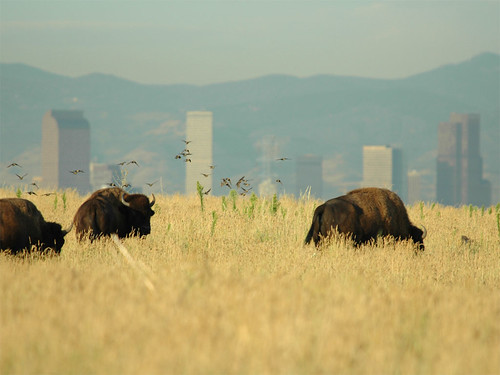 View All Poems by Arapaho (Anonymous)

When my wife and I first moved to Colorado, we would go for drives up in the mountains and also through country roads in the flat plains, getting to know this land. As a city boy who spent his teenage years in Los Angeles, the vistas were stunning to me. And one of the most startling sights was coming across small herds of buffalo. With their massive heads, dense bodies, mountainous shoulder humps, they seem somehow prehistoric, earthy and primal and unsettling. I immediately loved the sight of them. We would stop by the side of the road and, from the safety of our car, watch them. The nearest bull might lift his massive head and gaze at us before walking off to rejoin the rest of his herd amidst the yellowing grasses. A good reminder for this city kid that our car was the alien there, while the buffalo was at home.

We tend to think we are being generous when we make room for other creatures in the world, but that is a modern delusion. No matter how completely cities and human environments seem to us to be the "real" world, it is all, always, built on the foundation of the natural world, and utterly dependent on it. We need the world's other creatures nearby, and in our midst, if we want a lasting society that works well with the world that is our only home. The more society severs that connection, the more unstable it becomes. Those strange, unsettling buffalo are essential to a human society that hopes to last.

Toward the end of the U.S. genocidal wars against the American Indians in the 1800s, and the accompanying devastation of the buffalo herds that the Indian nations of the plains depended on, a visionary movement arose. At its center was the Ghost Dance, in which the spirits (or "ghosts") of the lost people and buffalo were called forth. This spiritual movement was many things in the midst of the American Indian holocaust, but at its core the Ghost Dance movement was a multi-tribal metaphysical effort to return the world to balance and restore what was lost. That is why we have visionary affirmations, like "a nation is coming, a nation is coming" and "the buffalo are coming, the buffalo are coming."

Reading these sacred words of summoning, it might be worth taking a few moments to contemplate not only what Native Americans lost, but also what continues to be lost, destroyed, or pushed aside in the world even today.

But we must also ask, What are the good things in modern world culture? Where does hope sprout and spirit bud? That's there too.

Most importantly, how do we draw on our connection to that which is living and sacred in order to establish and protect harmonious ways?

What makes the world worth living in?

To start, we must, each of us, each in our own unique way, discover the life and light we possess, so we can say with unassailable certainty, "it is I who wear the morning star on my brow." And we must show this truth to our children...