Every man who knows his secret

Every man who knows his secret
becomes a secret,
hidden from the skies.

The sage says Ahmad rose to the heavens;
Sarmad says the heavens
rose in him! 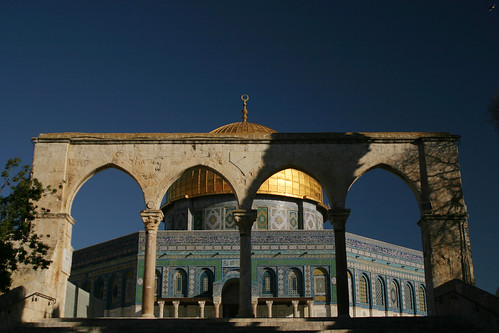 View All Poems by Sarmad

Isn't that a great opening?

Every man who knows his secret
becomes a secret,
hidden from the skies.

When we become aware of the secret contained within us, the ego self disappears. What most people think of when they call you a person becomes "hidden from the skies."

The sage says Ahmad rose to the heavens;
Sarmad says the heavens
rose in him!

These closing lines are saying something interesting too. Islamic religious tradition tells of the Mi'raj when the Prophet Mohammed (Ahmad) journeys to the Dome of the Rock / Al-Aqsa Mosque on the Temple Mount in Jerusalem, and from there ascends into the heavens, where he converses with other prophets and, ultimately, God.

Sarmad, with the mystic's instinct, turns this inward, declaring that the Mi'raj was not an external journey, but a journey within, for "the heavens rose in him!" This declaration makes the journey to heaven available to us all; we may not all be prophets, but we all can discover the same heavenly core within ourselves.

If we then go back and consider how the two halves of this verse fit together, Sarmad seems to be suggesting that discovering this "secret," the fundamental truth of reality, shifts our conceptual relationship with the heavens/skies. We are no longer held beneath the heavens, instead they are found within us, within the spacious center of the heart. This sense of being "hidden," the loss of the little self, also means a loss of limiting boundaries. It is only in this expanded, yet formless sense of self that we discover the inner pathway to the Divine. Or, you could say, that we discover the heavens as already here, already within us. It is a journey in which we have already arrived.

We can also choose to read a contemporary political meaning into this, as well. The Al Aqsa Mosque in Jerusalem (which is also the ancient site of Solomon's Temple) is the physical site of the Prophet Mohammed's ascendance to heaven, but Sarmad says the heavens are within. We could say then that the Temple Mount is the heart of the world, the place where the world has the potential to discover heaven, as well as where we can cause each other the greatest harm by denying the inherent heavenly nature of the world.

The spiritual journey, whether personal or global, is always a question of the heart. The more we open the heart to others, the more it opens unto us, finally revealing the secret pathway to the heavens. It is a pathway with precisely one step: a courageous step into the living present. Inexplicably, the whole world follows.

Every man who knows