Collect your mind's fragments
that you may fill yourself
bit by bit with Meaning:
the slave who meditates
on the mysteries of Creation
for sixty minutes
gains more merit
than from sixty years
of fasting and prayer.
Meditation:
high-soaring hawk
of Intellect's wrist
resting at last
on the flowering branch
of the Heart:
this world and the next
are hidden beneath
its folded wing.
Now perched before
the mud hut
which is Earth
now clasping with its talons
a branch of the Tree
of Paradise
soaring here
striking there -- each moment
fresh prey
gobbling a mouthful of moonlight
wheeling away
beyond the sun
darting between the Great Wheel's
star-set spokes, it rips to shreds
the Footstool and the Throne
a Pigeon's feather
in its beak --
or a comet --
till finally free of everything
it alights, silent
on a topmost bough.
Hunting is king's sport,
not just anyone's
pastime
but you?
you've hooded the falcon
-- what can I say? --
clipped its pinions
broken its wings...
alas. 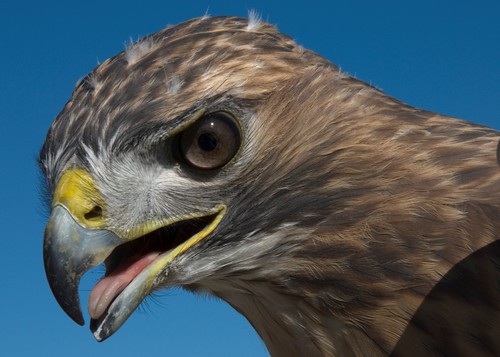 View All Poems by Hakim Sanai

This is such an interesting poem to me on several levels. Sometimes Persian poets will make reference to a king's hunting hawk. It is an image of noble bearing, heights of vision, and fierce service. But here Sanai compares meditation itself to a hunting hawk.

Meditation:
high-soaring hawk
of Intellect's wrist
resting at last
on the flowering branch
of the Heart:

That's a great element of the metaphor to contemplate: meditation begins with the intellect, but leaves the intellect behind. It then soars high into the heavens, before coming to rest in the wild, naturally flowering heart. That right there is worth its thinking about more deeply.

But the lines that describe meditation as a hunter are what most grab my attention. Meditation boldly hunts all of existence, vanquishing everything between earth and heaven. Every single instant is prey for meditation. "Each moment fresh prey..."

For meditation, everything is prey, everything is food. And, as meditation hunts, the meditator sits still, watching in wonder, as this fierce hawk clears away the multiplicities of existence in the vision of unity.

But hawking is the game of kings. Here's our challenge: Do we sport with the world as kings, or do we clip meditation's wings?