I find you, Lord, in all Things and in all

I find you, Lord, in all Things and in all
my fellow creatures, pulsing with your life;
as a tiny seed you sleep in what is small
and in the vast you vastly yield yourself.

The wondrous game that power plays with Things
is to move in such submission through the world:
groping in roots and growing thick in trunks
and in treetops like a rising from the dead. 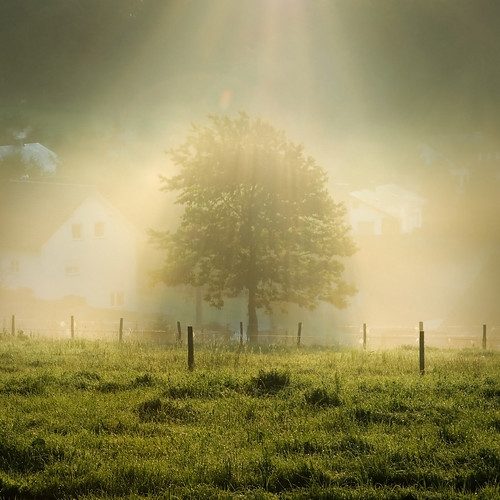 This is a poem I have featured before, but I found myself reading it this morning and decided that it was a good one to share with you again...

and in the vast you vastly yield yourself.

Isn't that a magical line? In the second verse Rilke is really saying something of deep insight about about what real power is:

The wondrous game that power plays with Things
is to move in such submission through the world...

The "power" he is talking about is obviously not power over, not the domination of the warlord or the predator. Following on his first verse, we can read power as the power of the "Lord, in all Things." It is the power of life itself, awareness, presence. Rilke's use of the word "power," makes us question the assumptions of common language: Perhaps this gentle presence is real power, rather than the fleeting assertion of force and fear.

This real power plays a game in the world of things. It expresses its power through submission, rather than control. Like water, it yields and so finds its destination. It allows, and so fulfills its purpose. It is supremely humble, and so is humbly present everywhere, in all things, without prejudice or rejection. It rises from the lowest to the highest, vivifying everything it touches--

groping in roots and growing thick in trunks
and in treetops like a rising from the dead.

This power flowing through us and all our "fellow creatures" binds us all with the same life. You'll notice, it is not even our life at all. Rilke says "your life," the Lord's life. It is something we participate in, a current we ride as it flows through us and the world, but it is not our own. Rilke is hinting at a larger vision in which there is only one Life flowing through a million "Things."

Hildegard von Bingen, the great medieval mystic, called this the viriditas or greening power of God.

Too much of our relationship with the natural world is built on ideas of separation and domination. Such foolishness can only ever harm us. When we see clearly, we see as Rilke does that we are part of the same shared Life. To harm the natural world is to rebel against God. Is that language too religiously loaded? Reread Rilke's poem, and then think about it.

I find you, Lord