When the mind is at peace

When the mind is at peace,
the world too is at peace.
Nothing real, nothing absent.
Not holding on to reality,
not getting stuck in the void,
you are neither holy nor wise, just
an ordinary fellow who has completed his work. 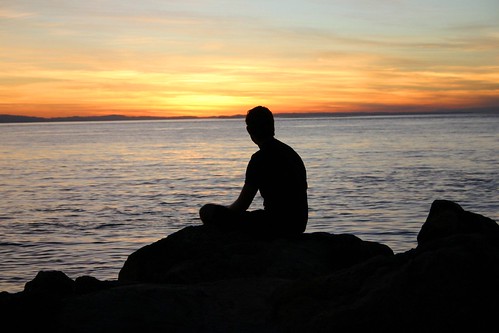 This is such a lovely statement that seems to feed so naturally into a serene state, but it is also saying something very powerful that overturns our common assumptions.

Most often we imagine that if our lives and society and the world as a whole would just settle down, then perhaps we could experience peace. And so we turn all of our efforts outward, trying to force a sense of peace in the world. That doesn't usually work so well, does it?

It can get to the point that turning inward, prayer, meditation can feel like a betrayal, as if we are abandoning the outer world to chaos, while we selfishly seek a separate sort of peace.

But the strange truth is that we don't create a peaceful environment and then experience peace. The reality is the reverse. We discover peace within, and only then can we recognize it without. More surprising still is that we come to see that the "world" outside of ourselves is but a reflection of our own inner state. When we discover peace within, the world comes to rest as well. Does that mean problems in the world disappear? No. But we recognize the peace that underlies even those problems, and we begin to see new ways to coax that peace to the surface. At peace, in peace, we invite peace.

Nothing real, nothing absent.
Not holding on to reality,
not getting stuck in the void...

Enlightened awareness is not a game of carefully constructed definitions. It is not a feat of the intellect, which tends to separate and categorize perceived reality. Even at its most subtle and incisive, when the intellect tries to separate the real from the non-real, it is setting up a filter upon the awareness.

When the mind is truly at peace, not only have thoughts come to a rest, but more importantly those unconscious mental filters no longer pre-sift the perception of reality.

The poet seems to be describing a trail for us to follow, a path found precisely where existence meets Nirvana, and we must gracefully walk between the two.

With no clinging to either "reality" or "void," the whole and unfiltered vision comes upon us.

Engulfed by this truth, we are not "wise" or "holy" -- those are further categories. No, we just are. We are not this or that, we are.

...an ordinary fellow who has completed his work.

We no longer feel the need to do something to validate our existence; we undeniably are. No work remains to be done. One may still be active in the world, but there is no "work" behind it, simply the dance of stillness, presence, and flow. Observers may disagree, but you understand that all that seemed important about your identity has trickled away, and you have become unremarkable, purely as you are -- an ordinary fellow, alive in this extraordinary world.

When the mind is at