I sought to devour Thee:
Come now and devour me,
Then there will be peace, Arunachala.

You bade me give all for you --
Take now the giver too,
Survive alone, Arunachala!

Let now the deception end.
There was no lover or friend
Apart from Thyself, Arunachala!

Now that at last I know
All this a magic show,
Let it dissolve in Thee, Arunachala! 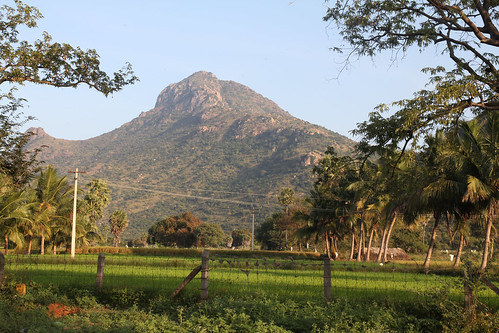 View All Poems by Arthur Osborne

Arthur Osborne was one of the early Western seekers to write about Ramana Maharshi, one of the most loved and respected nondualist sages of India in the early 20th century. Ramana Maharshi's ashram was (and still is) at the foot of Arunachala Hill, which, since ancient times, has been an important sacred site in southern India. For many devotees, Arunachala is considered an embodiment of the god Shiva.

So, when Arthur Osborne addresses this poem to Arunachala, he is addressing the mountain, the guru, and the God.

There is something lost, I think, in Western forms of religion that tend to divide the divine from the land. In many cases, to address God in a mountain or a lake or a tree is considered blasphemous. Then add to that the modern worldview which further objectifies the land, defining it as inert matter, a possession, a subjugated source of wealth and resources.

Imagine how profoundly our lives -- and our spirituality -- can open up when we relate to the Divine, not just in a safely distant, hard-to-imagine heavenly otherworld, but also right here, in front of us, below us, all around us, materially. God in the air we breathe, God in the stream running along the edge of town, God in the solid ground beneath our feet.

In this way, all the world becomes sacred space, alive, inviting communion with every touch. We are no longer alien creatures in a sterile world. We are embraced by the immensity of life on all levels.


There is a disturbing intensity to this poem.

I sought to devour Thee:
Come now and devour me,
Then there will be peace, Arunachala.

Do these first lines seem shocking? Actually, we find this sort of imagery in many expressions of sacred poetry. One way to understand what is being said is that the spiritual seeker usually starts by attempting piece together a perfect concept of the Eternal. We read every book, study with every teacher, in the hopes of formulating a rock-solid definition of God. But this approach is, in effect, an attempt to contain the limitless Eternal within the limiting confines of the human mind... while keeping the ego-self intact. It is an attempt to "devour" God, and it is doomed to fail.

The mature spiritual aspirant comes to recognize that success is not in containing the Eternal, but in consciously merging with It. This is is what it means to be "devoured" instead by God. You can say that when the drop of water falls back into the ocean, it has been devoured.

But it doesn't just happen. It requires preparation, and a courageous invitation:

You bade me give all for you --
Take now the giver too,
Survive alone, Arunachala!

The final two verses speak about a "deception":

Let now the deception end.
There was no lover or friend
Apart from Thyself, Arunachala!

Now that at last I know
All this a magic show,
Let it dissolve in Thee, Arunachala!

There is an appearance of things, a "magic show" that suggests believable reality, but that ultimately "dissolves." Here Osborne is evoking the nondualist vantage point where all apparent duality and separation is seen to be unreal. We typically relate to all of reality through the subject-object relationship, self-other, witness-observed. This even permeates the fundamental spiritual relationship: lover-Beloved, devotee-God. Nondualism points out that, at the moment of realization, even that relationship between the individual and the Divine falls away and the unity of reality is seen as it is. There is always and only the Divine. Everything else was just a magic show of light and shadow and shape.