O I saw witchcraft tonight
in the region of Braj.
A milking girl going her rounds,
a pot on her head,
came face to face with the Dark One.
My friend, she is babbling,
can no longer say “buttermilk.”
-- Come get the Dark One, the Dark One!
A pot full of Shyam! --
In the overgrown lanes
of Vrindavan forest
the Enchanter of Hearts fixed his
eye on this girl,
then departed.
Mira's lord is hot, lovely
and raven --
tonight she saw witchcraft
at Braj. 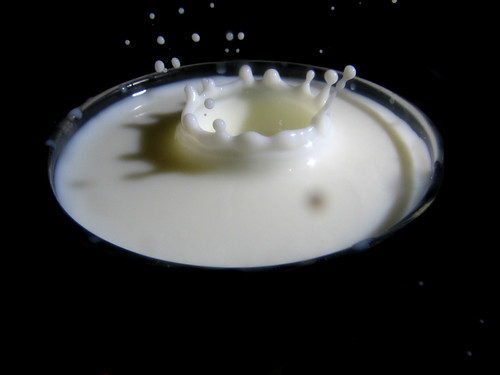 View All Poems by Mirabai

The "Dark One" referred to in Mirabai's poetry is Krishna, whose name can be loosely translated as the dark one.

In this poem, milk is the ambrosial drink, the sweet subtle liquid-like substance often perceived during states of sacred ecstasy.

Mirabai herself is the "milking girl going her rounds." She is the mystic gathering the blissful substance of divine union, traveling town to town as a mendicant ascetic, with her awareness making the pilgrimage through the psycho-spiritual centers of the spiritual body (Vrindavan forest, where the Enchanter of Hearts is found).

The milk pot is "on her head" -- a reference to the skull as the bowl that catches the fountain of the rising Kundalini Shakti and the descending heavenly liquid.

When the ecstasy of spiritual union is strong, it is sometimes associated with an outpouring of words -- one more reason so many mystics become "babbling" poets.

Her skull, the "pot," is full of Shyam -- Krishna, God -- and from this overflowing cup of divine milk, she is eager to share with all.

-- Come get Krishna, the Dark One! A head full of God and a heart touched by the Enchanter! --