The Song of the Poppadum

No need about the world to roam
And suffer from depression;
Make poppadum within the home
According to the lesson
Of 'Thou art That', without compare,
The Unique Word, unspoken
'Tis not by speech it will declare.
The silence is unbroken
Of Him who is the Adept-Sage,
The great Apotheosis,
With His eternal heritage
That Being-Wisdom-Bliss is.

The grain which is the black gram's yield,
The so-called self or ego,
Grown in the body's fertile field
Of five-fold sheaths, put into
The roller-mill made out of stone,
Which is the search for Wisdom,
The 'Who am I?'. 'Tis thus alone
The Self will gain its freedom.
This must be crushed to finest dust
And ground up into fragments
As being the non-self, so must
We shatter our attachments.

Mix the juice of square-stemmed vine,
This association
With Holy Men. With this combine
Within the preparation
Some cummin-seed of mind-control
And pepper for restraining
The wayward senses, with them roll
That salt which is remaining
Indifferent to the world we see,
With condiment of leanings
Towards a virtuous unity.
These are their different meanings.

The mixture into dough now blend
And on the stone then place it
Of mind, by tendencies hardened,
And without ceasing baste it
With heavy strokes of the 'I-I'
Delivered with the pestle
Of introverted mind. Slowly
The mind will cease to wrestle.
Then roll out with the pin of peace
Upon the slab of Brahman.
Continue effort without cease
With energetic élan.

The poppadum or soul's now fit
To put into the fry-pan,
The one infinite symbol it
Of the great Silence, which can
Be first prepared by putting in
Some clarified fresh butter
Of the Supreme. And now begin
To heat it till it sputter,
On Wisdom's self-effulgent flame
Fry poppadum, 'I', as That.
Enjoying all alone the same;
Which bliss we ever aim at.

Make poppadum of self and after eat;
Of Perfect Peace then you will be replete. 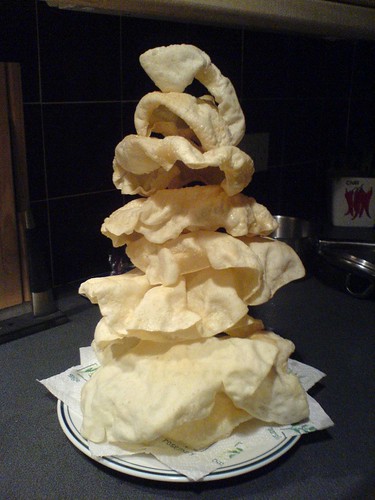 View All Poems by Ramana Maharshi

A playful song of realization and food preparation by the great non-dualist sage, Ramana Maharshi.

The story is told that the Maharshi's mother, who lived at her son's ashram, one day asked him to help in the preparation of poppadum, a spicy lentil-flour cracker. Instead, Ramana Maharshi composed this poem, comparing the preparation of the poppadum with the process of Self-Realization.

I'll admit, this English translation is more than a bit forced in order to get its singsong rhyme, but I can imagine a kirtan hall filled with people laughing and joyously singing these words... all the while growing hungry for supper. Maybe a few are even contemplating the consummation of awareness that food, attentively prepared and eaten, can be to us.

Next time you go to your local Indian restaurant, order some poppadum. And contemplate what you are really consuming.

Eat, so your cravings you may satisfy...

The Song of the