[1] AWAKE! for Morning in the Bowl of Night

AWAKE! for Morning in the Bowl of Night
Has flung the Stone that puts the Stars to Flight:
And Lo! the Hunter of the East has caught
The Sultan's Turret in a Noose of Light. 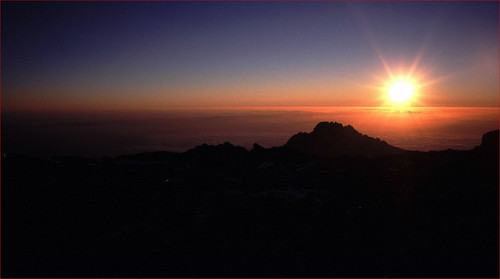 View All Poems by Omar Khayyam

I thought I would select the opening quatrain from The Rubaiyat of Omar Khayyam today in honor of the month of Ramadan for all of my Muslim brothers and sisters.

Reading this, we immediately notice the delightful sense of rhyme and meter in FitzGerald's translation. It invites us to say it out loud. We almost want to sing it.

But beyond the sheer poetic pleasure, is there anything of significance being said here? The poet is saying something about night and light and telling us to wake up, but we have to puzzle it out a bit before a clear image forms in our minds.

He describes the Bowl of Night, the night sky. Morning has flung a Stone into the Bowl of Night. If we imagine a large dark clay bowl, and a stone has been thrown into it, that stone will break through, creating a hole, allowing a sharp point of light to appear. He is describing the burst of light that is the suddenly rising sun.

The light of the sunrise puts the Stars to Flight by outshining the stars. In the sunrise, the night stars recede and all we see is the sun.

The next two lines might seem especially obscure. Who or what is the Hunter of the East? This is a way of referring to the constellation Orion, with his distinctive belt of three stars. Late in the year in the Northern Hemisphere, Orion ascends above the horizon in the east just before dawn.

Orion is traditionally seen as a hunter. But he is also associated with the east and the rising sun. It is as if the rising sun in the east is hunting, but hunting what?

He has caught the Sultan's Turret in a Noose of Light. The Sultan's Turret might be understood to be a minaret, the tower that calls the faithful to prayer. Or the turret might suggest the head or the crown, the rim of the earth itself encircled with a ring of light in that first flash of dawn.

As we unlock the language, it becomes a vibrant scene of waking up to the dawn.

But there is more going on here. Have you noticed how this imagery also resolves itself into the Muslim imagery of the Star and Crescent? Orion's Noose of Light encircles the darkened world. The stone has created a single point of light in the night sky in the east.

This is not simply an image of religious or national pride, it has profound meaning for the individual. The Star and the Crescent are themselves representations of enlightenment. We have the bowl of night, the skull, encircled by light. But that circle, as a crescent, is incomplete on one side to allow the star to rise in the east -- enlightenment. This small break in the circle of the individual identity, allows the spiritual light to flood in. This has been deeply understood and commented on by Muslim mystics over the centuries.

When we see the Star and Crescent, we should be thinking not of flags or nations, but the wali's enlightenment. Whenever we witness the rising sun, it too paints for us a picture of enlightenment.

Of course we start off with that command of the spirit: Awake! Enlightenment is ready to dawn in the soul, do not miss it! Awake! Awake!