O love's living flame,
so softly do you sear
the deepest center of my soul!
Now that you no longer shy away,
end this game, I beg of you, today:

Rip open the veil separating us
in this sweet rendezvous!

O beacons of fire,
in whose splendor
the blind, dark
deep grottoes
of the senses,
with strange and stately art,
warm and enlighten,
and win my love!

How tenderly is your memory
cherished in my breast,
where you alone reside and in secret rest:
Here I taste in your perfumed breath
goodness a-flood with glory--

How gracefully you've won my love! 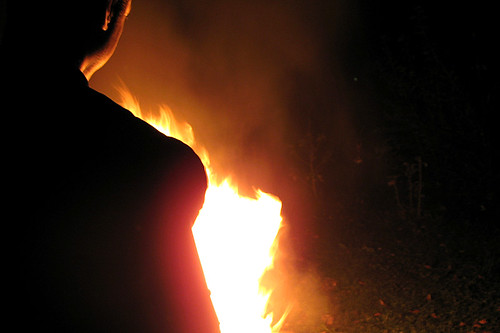 I have been hesitant to send out a poem in the last few days. With the mass protests against police violence, racism, and economic injustice emerging in the US and beginning to spread across the world, along with the chaotic nature of such spontaneous uprisings, there is so much to say, but I haven't fully distilled my thoughts. I have, instead, been processing the energies of this important moment, getting to know the currents moving through society right now. I encourage each of us to take some time to feel what is happening and why, not through the logical mind but using a more immediate, empathic part of our awareness. The pain and fear and frustration that are fueling this mass movement are significant, so this moment should not be surprising. The question is, will this movement gain focus and purpose? Or will it fragment into chaos? How harsh or accommodating will be the response of federal and state governments? Even a brutal crackdown -- which, unfortunately, seems likely in the current environment -- will only redirect these immense energies to find new expressions in the world. It doesn't make things any easier that we are coming up on three eclipses within the next month. A lot of upheaval, though, on a certain level, necessary and unavoidable.

It is worth keeping in mind the saying, "A riot is the language of the unheard." The question is not how to get things back to normal. If things felt normal even a few years ago, then we weren't paying attention. The question is, how do we make our social systems responsive to the real needs of people, especially those who are struggling or being brutalized? On a personal level, what can we do to step out of our own bubbles of comfort in order to be a more positive presence in the world?

I encourage us all to practice awareness, keep the heart engaged, and to be of service where we can.

Meditating on these sharp questions, John of the Cross came to mind. He speaks so eloquently of the integrated extremes experienced by the awakening soul.

…A poem to explore the soul's journey of wounding and death, leading to renewed life and openness and integration.

John of the Cross gives us several important themes here worth exploring:

In the ecstasy of deep communion, there is often a sense of heat—filled with immense love—that permeates the body. As this fire moves through the body, it also moves through the awareness, consuming all thoughts (or, more accurately, the tremors from which thoughts emerge). This fire burns away even the thought of “I” until only the sense of this living flame remains.

This is such a wonderful fire that mystics often describe it as a flame of love, so enchanting that, like the moth, you want to dart in and be utterly consumed.

This is why John of the Cross refers so passionately to “Love's living flame.”

The notion of wounding as part of the spiritual path has particular significance within mystical Christianity, but we find similar language in all spiritual traditions.

This “pain” has a few levels of meaning. At one level, the pain can be quite literal and even physical. But it might be more accurate to refer to this as intensity rather than pain. It can be as if the senses and the perceptual mind's ability to process it all gets overloaded. The mystic then experiences a searing, cleansing sort of intensity that might be called pain.

Through profound opening, one feels everything more completely, a sort of universal empathy. There is a lot of hidden suffering in the world and, at a certain point, we feel it as our own. (Actually, we always feel it anyway, but in deep communion the walls of denial fall away, and we become aware of it for the first time.) In a directly sentient way, we become aware of the interconnectedness of life. Initially, that flood of feeling is intense, even painful, but that is the pain of the heart breaking open. It becomes a sort of wound one carries, but it resolves itself into a beauty and sense of unity that manages to incorporate even the most terrible suffering.

Other mystics speak of a wounding in a more metaphorical sense. The pain experienced is the perception of one's separation from God. But that pain itself is the doorway to reunion. By allowing oneself to become completely vulnerable to that pain, to surrender to it, the mystic finds the pain transformed into the blissful touch of the Beloved.

Ultimately, all of these forms of pain are the pain of the pierced ego. For one with inner balance, where the protective but limiting shell of the ego is no longer necessary, that pain points the way to freedom.

For this reason, mystics and saints describe the pain as being joyful or beautiful. This pain is, in fact, the beginning of bliss.

With all this talk of pain, let's not forget that this pain is not a negative. When we acclimate to the intensity, when the reflex to contain the flood eases, we discover that the overriding sensation is one of sheer bliss.