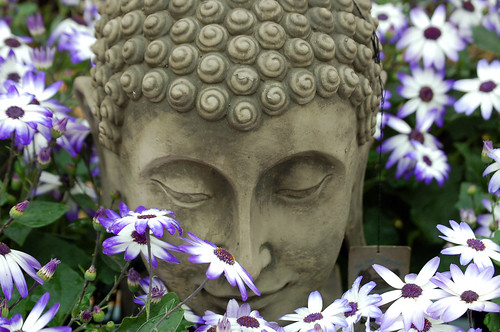 I could just live on the nourishment of haiku every day. A few lines, so short they're almost incoherent... the way they teeter on the edge of meaning and occasionally slip into the void... Something about that desperate line dares the mind to burst open with insight.

This haiku, for example -- I don't read it as being about enduring uncomfortable weather. There is more than that here. There is acceptance, a quiet contentment, even a welcoming. It is about the recognition of the rightness of things in their season. And that touches the eternal. The Buddha is simply here, always here, always present, and we feel the winter rain is simply passing by for its short moment. The rain touches the Buddha's face, and then moves on. So too the wind, the sun, the rising of grasses, the blooming of flowers. They come. The Buddha sits, smiles, accepts. And the world moves along again in its cycles of life, becoming and unbecoming, while the Buddha remains.

And what is the Buddha's body but us, our very nature? The body arises, the seasons of the self blossom and turn inward again, and through it all there is a still point within us quietly watching, and accepting, and smiling.