O most noble Greenness, rooted in the sun

O most noble Greenness, rooted in the sun,
shining forth in streaming splendor upon the wheel of Earth.
No earthly sense or being can comprehend you.
You are encircled by the very arms of Divine mysteries.
You are radiant like the red of dawn!
You glow like the incandescence of the sun! 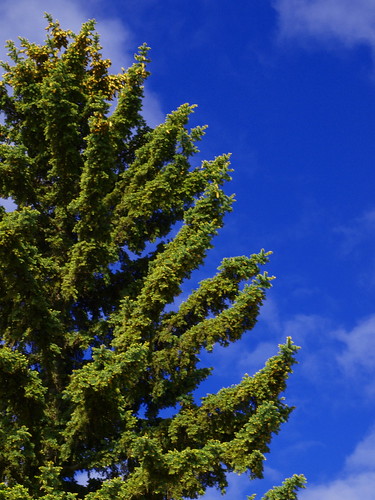 Although it's never explicitly stated, Hildegard von Bingen seems to be evoking the image of a tree, with its roots and its reach. This is the Tree of Life. Hildegard's "Greenness" is elsewhere translated as "evergreen." The evergreen tree is often used as a symbol of eternal life -- it is always green and vibrant, even during winter, the season of death and withdrawal. Within the Christian tradition, the evergreen is specifically a symbol of Christ, the one who overcomes death, the one who is the embodiment of eternal life. Christ is particularly associated with the tree based on prophetic associations of the messiah as 'the branch' and, of course, because of his crucifixion (being 'hung upon the tree').

So when Hildegard, a Catholic nun, sings to the evergreen, she is singing to Christ, the Beloved, the Living One.

Hildegard's evergreen almost sounds like a yogic image. In Yoga, the subtle energetic body is often described as a tree: the trunk is the central axis, the subtle spine. But what does Hildegard mean when she refers to the tree as being "rooted in the sun"? This is one of the more interesting lines to me. In the Western alchemical tradition, the seat of the body, the "root," is sometimes associated with fire (in Yoga we would say the fiery Kundalini); and in alchemical engravings, we often find the the image of a sun at the body's base. Hildegard von Bingen was apparently using the language of spiritual alchemy. This raises the fascinating question: Was Hildegard von Bingen, in addition to being a Catholic nun, also an initiate of secret esoteric traditions? Her work as an respected herbalist and healer certainly could have introduced her to medical alchemy practiced at the time.

(An alternate way to read the roots in the sun metaphor is that, like the yogic tree, Hildegard's evergreen is upside-down, with its roots in heaven -- the radiant crown chakra -- making its branches the energetic pathways of awareness that reach outward through the senses into the world. That reading, of course, raises even bigger questions...)

This tree, this Greenness, "glows," it is "radiant like the red of dawn." The "incandescence" of this tree suggests not only radiant light, but heat, fire. Hildegard may also be drawing a parallel with the burning bush Moses witnessed in the desert. If Moses's burning bush is the same as Hildegard's incandescent Greenness, and they are both understood to be the structure of the subtle spiritual body... well, we, as mystics, have some interesting avenues to explore...