Thief of hearts,
you have ransacked
this beggar's hut,
left me
nothing.

All I see
now
is the print
of your pilfering hand
everywhere. 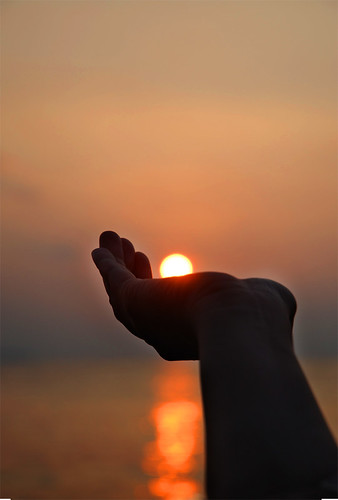 It has been a while since I featured one of my own poems. Here is one for you today in homage to that "thief of hearts," who is, of course, the Beloved, God.

Let's face it, from the ego's point-of-view, the relationship with the Divine is a problematic one. What the heart recognizes as liberation, the ego sees as theft. It's really very funny... when we're not tormented by the spiritual dilemma, that is.

All that the ego claims as its own slips from its grip. Control and possession define the ego. So what is it to do when the master thief breaks into the awareness and reveals everything to be the filmy stuff of dreams and light?

In that ultimate moment, however, the emerging bliss is so all-pervasive that even the drowning ego laughs with its last gasp.

Something I thought I'd point out about the poem's structure: The poem itself is a pair of thieving hands. It has two groups of five lines, suggesting two hands with five fingers each.

Also, notice that the lines "left me / nothing" are intentionally ambiguous. They could be saying that the thief of hearts has left me with nothing -- having taken everything -- or perhaps it is saying the thief has left me as nothing -- without identity or sense of ego.

The line breaks for "All I see / now" leads the unconscious mind to read several layers of meaning into the lines. Some part of the awareness will read that first line as a complete statement of its own: "I see all." To follow with the single word "now" snaps the awareness into the present moment. When one sees all, one is fully present, now. Or, when one sees, all is in the present moment.

In this supremely full moment, the "pilfering hand" has removed everything. The world normally perceived as a scattered collection of disconnected people and objects disappears. But -- and here's another secret -- that hand secretly gives as it takes. The "print" of that hand leaves us, instead, within a magical universe filled with immensity and life and a giddy sense of being that flows everywhere.

Too much explanation? Maybe we should just let the poem itself do its work...