true native
his land has grown
strange about him

lean with life
on silent steps
through twilight
he glides

glanced
by chance
or by patience
perhaps

he stops
in the alley
way

waiting
for you
to pass 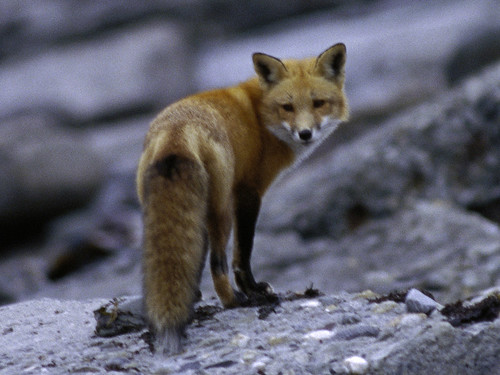 / Image by US Fish and Wildlife Service /

When I was a teenager, something about the world around me began to feel alien, unnatural, even threatening. And these feelings mixed with the normal teenage angst to create an explosive and desperate spiritual instinct. I came to the grim conclusion that the world has as its primary purpose making us unknown to ourselves, that it steals something fundamental from us in order to create conformity and a shared, but bland reality. Everything began to feel false, artificial; I wanted to know what was true and real.

I became reclusive. I was determined to not be hemmed in by the common assumptions of how the world works, what is real, and what is spirit. I turned inward. I sought solitary places. I sought nature. I sought quiet.

While this period forged my spiritual will, it was also a difficult time. I was depressed, isolated, and lost. But, amidst that struggle, hard, hidden parts of myself began to open. As I learned to trust my own spiritual unfolding, I became less severe in my judgment of the world around me. I slowly lost the need to hold myself in stern separation. I began to recognize myself in others. I discovered in myself a growing compassion, not only for people, but for the world. I came down from the mountain. Ever since, I've been learning what it means to really inhabit the world, and share it, and hopefully nudge the boundaries of those common assumptions.

These ruminations reminded me of today's poem...


I view the fox in this poem is the Real Self, our inherent, free, divine nature.

The "strange" land that has grown about him, the city of the title, is the construction of thoughts, projections, concepts, and artificial divisions imagined by the busy mind. It is the human world of convention and consensus.

Yet, even in this unwelcoming environment, the fox, the Self, remains. He is the "true native," present before the mind's constructions. He belongs right where he is. He knows all that has grown about him is transitory, that it cannot endure.

In this city, genuine sustenance is often limited, so the fox is lean. From the viewpoint of the city dweller, the restless mind, the Self seems to hardly have any substance at all. Yet its very leanness is the proof of its authenticity, its uncompromised, untamed life. Through its leanness, life radiates fiercely!

The Self is silent, and known in silence. Without a sound it moves through the artificial world, true to its essential nature.

If by chance, or through determined, patient spiritual practice, we catch a glimpse of the Self, the hidden fox stops into plain view, revealing himself in his full, living, wild glory. Actually, it is not so much the Self that stops; it is we ourselves who pause our movement and can then see it. The sight of such essential life, the realization that it has been secretly sharing the same world with us all along, brings us to a complete halt.

The fox is spied in an alleyway. This alley is the path ignored in the world of the city; it is there, but forgotten, overgrown, avoided, and this is where the fox dwells and hunts. We have finally learned to look into the hidden places we'd trained ourselves not to see.

Now that's an encounter worth some strange turns down unknown alleyways...