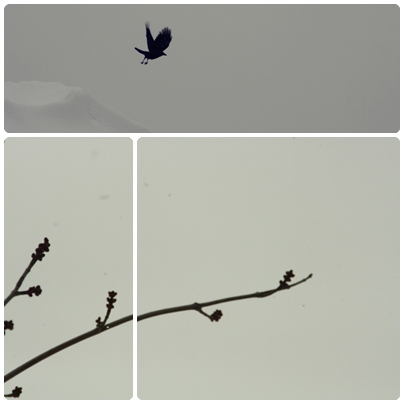 View All Poems by Matsuo Basho

Death has been on my mind. I found out yesterday that a relative of mine, an aunt I was close to when I was a teenager, just passed away. Truthfully, I had been out of touch with her in recent years, but I still found myself experiencing the entire range of responses at the news of her passing-- mild shock, slowly welling grief, replaying of past memories.

When someone we feel a connection to dies, we often enter a shadow realm ourselves. It is as if we walk with that loved one to the threshold. That sense of the world's structure that seemed so solid and unquestioned becomes suddenly fluid. When death ceases to be a distant concept and, instead, shows itself to be a present reality, everything starts to shift and slide. Any thing, any person can move in and out of the world. A loved one can step beyond our embrace. In a world of such disappearances, reality itself becomes disconcertingly intangible.

Thinking these thoughts, I came across this haiku by Basho...


It's usually a mistake to simplistically explain a haiku's meaning. Its primary impact is not really comprehended by the logical mind at all. Most haiku aren't composed with intentioned metaphors; rather, the moment naturally resonates with nature's implied truths.

But, for the sake of play, let's explore this one anyway...

We see an abandoned nest seated in a plum tree. The nest is an image of emptiness, perhaps even desolation or death. But the plum tree suggests life. Here at the beginning of spring, I instinctively imagine the first pink and white blossoms to be appearing on its branches. Life and death at ease with each other. Sorrow and hope emphasizing each other through contrast.

That's my first read, what I feel as I first glimpse these images in my mind's eye.

But we can back up, clear our minds, and read Basho's lines on a very different level.

In this haiku, each line gives us a distinct element: a crow, an abandoned nest, and a plum tree. Basho ordered his lines so first we have the awareness of a crow, which might be understood as representing the busy mind, a bird that proclaims its presence by croaking in the winter sky. Like the mind, the crow is a carrion feeder, ungainly in its movements but somehow suggestive of a mysterious hidden reality.

Next, Basho shows us that this crow has abandoned its nest. With the coming of spring, the crow has left. With the blossoming results of winter's discipline, the mind has emptied itself, grown quiet, still.

An empty nest may be a curiosity for a moment, but its animating principle, the part that normally holds our attention has vanished, and so the vision widens and we finally notice the plum tree that supports it. Watching the empty mind, we finally expand our perception and recognize the full awareness in flower. We witness the natural, unmodified awareness of the Buddha mind that upholds mind and all creation.

To those of us who have felt the loss of a loved one, perhaps we will allow some grieving part of ourselves to open and expand. And may we celebrate the life flowering all around us amidst this fluid, ever changing universe!