I said I will find what is lowly
and put the roots of my identity
down there:
each day I'll wake up
and find the lowly nearby,
a handy focus and reminder,
a ready measure of my significance,
the voice by which I would be heard,
the wills, the kinds of selfishness
I could
freely adopt as my own:

but though I have looked everywhere,
I can find nothing
to give myself to:
everything is

magnificent with existence, is in
surfeit of glory:
nothing is diminished,
nothing has been diminished for me:

I said what is more lowly than the grass:
ah, underneath,
a ground-crust of dry-burnt moss:
I looked at it closely
and said this can be my habitat: but
nestling in I
found
below the brown exterior
green mechanisms beyond the intellect
awaiting resurrection in rain: so I got up

and ran saying there is nothing lowly in the universe:
I found a beggar:
he had stumps for legs: nobody was paying
him any attention: everybody went on by:
I nestled in and found his life:
there, love shook his body like a devastation:
I said
though I have looked everywhere
I can find nothing lowly
in the universe:

at one sudden point came still,
stood in wonder:
moss, beggar, weed, tick, pine, self, magnificent
with being! 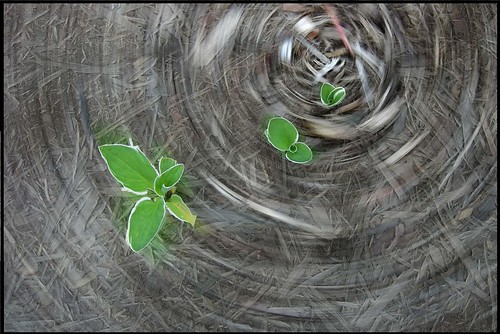 View All Poems by A. R. Ammons

What a stunning poem! It brings our awareness down, down into the root of being.

There are several wonderful lines, but I want to explore where A. R. Ammons has chosen to break his lines.

I can find nothing
to give myself to:
everything is

Read each line separately. "I can find nothing," he says, and only parenthetically adds, "to give myself to."

He doesn't simply say, "everything is magnificent with existence." He breaks the line emphatically. "Everything is!" he proclaims. Being, the pure existence of things, is itself what is "magnificent." His strong line break drives home this truth by requiring us to read the line as two distinct statements which the mind only later pieces together to form a single sentence.

Another line break to contemplate:

nestling in I
found

He is saying two things at once with the line break here. The surface reading could be paraphrased as, "I found while I was nestling in..." But another reading is, "Nestling in myself, I (am) found."

The final stanza might encourage the second, more mystical reading:

at one sudden point came still,
stood in wonder:
moss, beggar, weed, tick, pine, self, magnificent
with being!

I don't want to pass by the line about the beggar -- "there, love shook his body like a devastation."

though I have looked everywhere
I can find nothing lowly
in the universe...