An Improvisation for Angular Momentum

Walking is like
imagination, a
single step
dissolves the circle
into motion; the eye here
and there rests
on a leaf,
gap, or ledge,
everything flowing
except where
sight touches seen:
stop, though, and
reality snaps back
in, locked hard,
forms sharply
themselves, bushbank,
dentree, phoneline,
definite, fixed,
the self, too, then
caught real, clouds
and wind melting
into their directions,
breaking around and
over, down and out,
motions profound,
alive, musical!

Perhaps the death mother like the birth mother
does not desert us but comes to tend
and produce us, to make room for us
and bear us tenderly, considerately,
through the gates, to see us through,
to ease our pains, quell our cries,
to hover over and nestle us, to deliver
us into the greatest, most enduring
peace, all the way past the bother of
recollection,
beyond the finework of frailty,
the mishmash house of the coming & going,
creation's fringes,
the eddies and curlicues 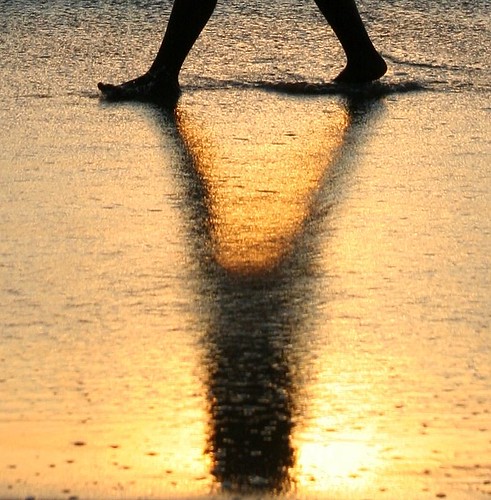 View All Poems by A. R. Ammons

This is such an interesting poem to me. The first section is a fascinating, very specific exploration of how perception shifts when we are walking rather than standing still.

When we are stationary, we perceive our immediate environment -- the small "circle" of our world -- as being fixed. Because we don't move, the world around us doesn't move, and everything we see seems very "real" -- concrete, tangible, "locked"

But when we move, when we start to walk, we "dissolve the circle;" we step outside our own bubble. Objects are no longer stationary. Our eyes can no longer lock on things. Instead, our vision flows over things, their edges are less defined, their reality softens.

We notice that the self, too, changes its nature. Perceiving a world of fixed, solid objects, we imagine ourselves to be the same. In a soft, moving world, we see the self not as a thing but as a flowing process of perception.

This reminds me of something I used to practice some years back. My wife and I usually share driving, so I am often in the passenger seat. When conversation would wane and I found myself sitting quietly in the moving car and nothing to do I would watch the world go by in two specific ways. First, I would fix my attention on passing objects, a street sign, a tree, a pedestrian, my head turning as we approached and then passed. Doing this a few times makes you dizzy. Then I would switch and look out the side window and intentionally not focus on anything in particular, just letting the world slide by in a fluid blur. Not only does the world's apparent tangibility shift, but the perceiver changes: consciousness shifts, attachment reflexes lessen. The way we look at the world influences the way we are in the world.

The second part of A. R. Ammons's poem does an interesting jump in theme. He then speaks of the "death mother" and the "birth mother." How does that relate to perception, walking, and standing still? We can begin to understand his meaning when we recognize what he is saying about them: Birth and death are not figures that mark the beginning and endpoint one's life. He suggests that they both journey with us all along. And, when it's time to pass through the "gates" of life, both of them, birth as well as death, tenderly guide us through.

Passing through that threshold of life-death, is similar to "dissolving the circle" of beginning a walk. We leave the fixed reality of physical life, and enter a more flowing relationship to existence, with a more fluid sense of self. He envisions a state of "great peace," unburdened by will, recollection, and vulnerability, all things that require wearying effort and attachment. This poem gives us a picture of death not as a stopping point, but as the beginning of a journey, one of panoramic vision and panoramic self.

An Improvisation for Angular Momentum